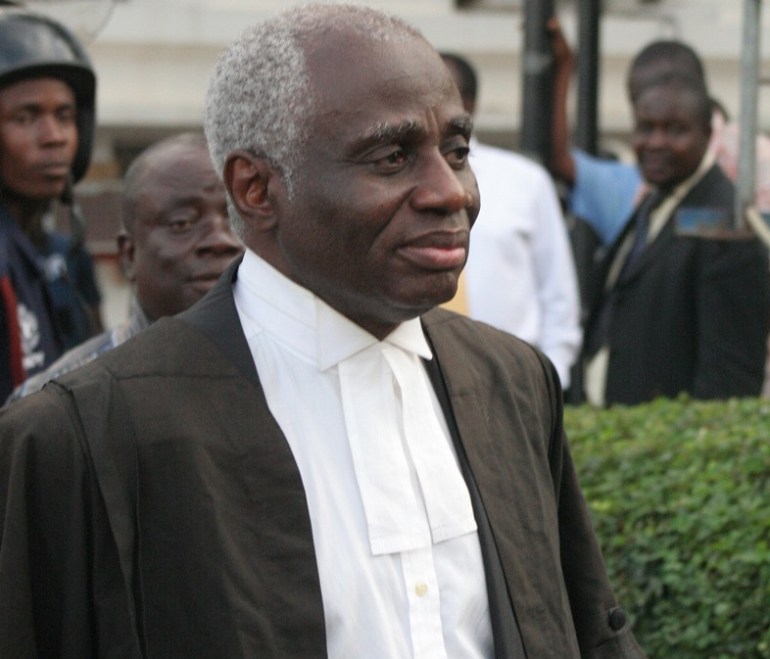 Certain decisions made by the Supreme Court on Thursday 30th July, 2020, when the application by the NDC and Mark Takyi-Banson for a review of the decision of the court, in the cases against the Attorney-General and the Electoral Commission on the conduct of the current registration exercise came before the court, are difficult to understand, to say the least. Sitting in that court room as the proceedings went on, there were so many odd things that took place.

The Court first heard an application by the applicants for abridgment of time, such that the periods provided for under the Supreme Court Rules for various steps to be taken before the hearing of a review application, are shortened. The court granted that application and decided that the review application itself should be heard immediately after their ruling to abridge time.

Mr. Tsatsu Tsikata pointed out that the applicants had given an indication that since the judgment only became available on the 15th of July, 2020, that is, nine days before the time for filing a review would ran out, the applicants wanted to file a supplement to the legal submissions they had filed within the very short time available to them.

It would be recalled that the decision of the Supreme Court was delivered on the 25th of June 2020, but the actual judgment was only available on the 15th of July, 2020. This means that the NDC and Mr. Mark Takyi-Banson had a little over a week to read the judgment, instruct their lawyers, and for their lawyers to prepare a motion paper, a supporting affidavit, and a statement of case all to be filed together for a review of the decision.

Mr. Tsikata stressed that the submissions filed already showed fundamental errors of law that had been committed in the judgment, including the fact that the decision was contrary to the provisions of various statutes and was, therefore, in legal parlance, per incuriam. However, there were additional errors that the applicants wanted to bring to the attention of the court, according to Mr. Tsikata, who said also that although the applicants are allowed a month to file a review, they did not have the judgment until about a week to the expiration of the one month period. Mr. Tsikata, therefore, asked for a week to file the supplement to the statement of case that had been filed already.

The Deputy Attorney-General, in response, said that what the applicants should rather have done was to apply for an extension of time for the filing of the application for review.

Mr. Tsikata then asked what the wisdom of that approach would have been as against what the applicants had done, by filing the application within the time limited by the rules, while asking for leave to file a supplement to the legal arguments they had filed within the very short time they had.

The Justices rose and went into chambers and then returned with their decision, refusing the applicants the opportunity to file the supplement to their arguments, stating that the request was not in accordance with law.

This was strange considering that, earlier on in this very case, the Supreme Court itself, after the parties had filed their respective statements of case, had ordered the EC to file further legal arguments to “offer the legal basis for not allowing the existing voter ID card to be used in the registration exercise.” In addition the court gave the other parties the opportunity to make additional submissions!

So the court has power to allow parties to file further submissions in addition to their initial statement of case and Mr. Tsikata was merely asking them to exercise precisely this power because he and his team, instead of having a month to prepare their application for review, had just over a week to do so.

There are other well known cases in which the Supreme Court has allowed the filing of a supplementary affidavit to a statement of case.

Accordingly, such a supplementary statement was filed with additional legal authorities before the court gave its decision which was in favour of the National Investment Bank.

In the normal practice of the courts, if the Justices thought that at the time Mr. Tsikata was putting forward the request to file such supplementary submissions, there was no legal basis for them to grant such a request, they should have asked Mr. Tsikata to indicate the legal basis on which he was making the request. They did not do so, but rather gave a reason which they had not given Mr. Tsikata the opportunity to address them on.

After the court’s refusal to grant the application for the filing of a supplement to the statement of case filed by the applicants, Mr. Tsikata pointed out to the court that the Electoral Commission had only filed its papers in the case that very morning and that these had only been served on the applicants while they were in court.

He indicated that he had not had the opportunity to read what had just been filed and that he could not proceed to move the application for review, since he would neither do justice to his clients nor discharge his function as an officer of the court responsibly.

He, therefore, asked the court to grant an adjournment and enable him to study what the Electoral Commission had just filed. Significantly, the Deputy Attorney-General did not oppose this request by Mr. Tsikata and made reference to the public interest in the case.

Once again, the court rose and went back into chambers to consider the matter. The court returned and the Chief Justice read a ruling refusing to grant this request for an adjournment and asked Mr. Tsikata to proceed with the application for review.

Mr. Tsikata then firmly stated that, without having read what the Electoral Commission had filed, he would not be in a position to represent his client properly and responsibly. He could also not discharge his duties as an officer of the court. Mr. Tsikata did not, therefore, move the application for review.

I am fairly familiar with the procedures in our courts and can attest that if a High Court judge, faced with a situation in which one side had served papers in court the very morning of the application before the court, and the lawyer for the other side said he needed time to look at what had just been filed, and the court refused to give the lawyer time and went ahead to hear and determine the case, that High Court judge would be said to have breached the rules of natural justice and fairness. And the Supreme Court would not hesitate at all in quashing such a decision.

Nonetheless, in this case, the Chief Justice went ahead to read a ruling stating that the application for review was “dismissed” on the ground that the applicants did not meet the requirements for a review.

As Mr. Tsikata never moved the application, it is strange the court said it had “dismissed” it! What emerged in the court proceedings was that the court was determined, at all costs, to “hear” the review application that day and dismiss it out of hand, without due consideration of its merits.

In the course of the proceedings, Mr. Tsikata pointed out that one of his junior counsel, Dr. Dominic Ayine whom I know to be a former Deputy AttorneyGeneral, had written a letter to the Chief Justice requesting for an early hearing of the case and also that the court sit during the legal vacation (which starts on 1st August).

ßThe Chief Justice himself could not deny the accuracy of what Mr. Tsikata stated. In the course of the proceedings also, it did not seem that the Justices had had the chance to read even what the applicants had filed, much less what the Electoral Commission filed in the morning at a time when the Supreme Court was already in session.

Right from the start, when the case was called and someone announced himself as representing the 2nd Applicant, Mark Takyi-Banson, one of the Justices wrongly stated that there was only one applicant.

Mr. Tsikata then had to read from the motion paper filed to show that the application involved two applicants.

Unfortunately apart from judgements and orders issued by the superior courts, nothing else about what actually transpires in court, find their way into official documents from which citizens can draw lessons on the service being provided by the courts. I pray that what I observed in court and am writing here will help us all to appreciate the work of the Supreme Court and the impact of its work on the citizens appreciation of justice as a fundamental plank of our governance system.